skip to main | skip to sidebar

Came home from Paris saturday, and with me I had this. The trio bag from Céline in a size large. It´s so beautiful and practical - it can actually hold so much! Besides its good looks, i really like the fact that it can be made into a clutch!
Indsendt af Claudia kl. 06.25 1 lovely thoughts

I shot these a couple of weeks ago on a sunny day in one of Copenhagens beautiful parks. The model, Lærke Simone did a wonderful job. I mean.. a total beauty right?

So, not that long ago, i was in the cinema to watch a new Coppola film that i had been rather excited about. And for good reason. I had done my own little research about the so called "bling ring" and their backstory, and with Emma Watson as part of the cast, wearing nothing but chanel and prada  i was hooked. Yes, maybe i'd thought that it would have been a bit deeper, but it's the perfect upgraded chickflick. Even if you're not a chickflick kinda gal, you should watch it, just for the sneek peak into Paris Hiltons Wardrobe and livingroom (i've never seen so many Louboutins!)


I've listened to When Saints Go Machine since their first album album in 2008, Ten Makes a Face. There is just something quite magical and outta-this-world about the voice of the leadsinger, Nikolaj. They have definately evolved since 2008, and especially this track, is different and with a strong hip hop beat.
(For some reason Vevo/blogger wont let me link to the original video.. so you'll just have to settle with this)

Since my winter jacket from last year ended up with white paint on the sleeves, after repainting the apartment, it has become a mission for me to find a new, classic and most importantly, warm jacket. These to are the two finalists. Left or right?

How beautiful is this? I'm absolutely in love with the second image.. The shiny cheeks, the douche colors and dark hair. Unfortunately, i have no idea where this is from, none the less, it's perfect. I'm drowning myself in inspiration lately, trying to think of anything else than of what's really on my mind.

glow in the dark arrow in the heart

I shot this editorial about two weeks ago, with an amazing girlpower team, consisting of both a new stylist and makeupartist! It's been over half a year since i've last shot an editorial, but that's all going to change now. All of my favourite editorials (and future editorials as well) can be found on my new website Claudiavegaphotography.com !

So christmas is just around the corner, and so i'm going christmas shopping this weekend with my family. This year i'm wishing for a warm jacket, beautiful underwear and a leather bag.

Claudia
I just turned 18, and I love to take photographs. 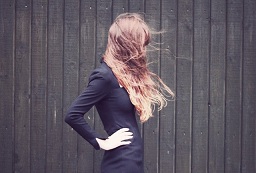